You are here:
Skills & Knowledge

About light and photosynthesis

When we talk about light for photosynthesis, we are talking about PAR (Photosynthetically Active Radiation).  This radiation consists of photons of light that are between 400-700nM in wavelength.

To choose the correct light for your culture, follow these three steps:

Step 1:  Find the major pigments for your algae strain

Step 2:  Choose a light that emits radiation in correct range (pretty much all lights) to be absorbed by the pigments in your algae.

Step 3:  Set up your light next to your tank

Wavelengths of light and the pigments that catch them

From that PAR algae and plants can absorb different wavelengths of light based upon the types of pigments that they exhibit.  The some of the important pigments are: Figure 2: Relative absorbance of photosynthetic pigments as a function of wavelength of light.

When you choose a light to grow algae, you want to make sure that the source is giving off energy at the correct wavelength.  This is why you do not see ‘green’ lights being used as grow lamps- green light is generally not absorbed by Chl-a,b, carotenoids.  However it is absorbed by the red pigment, phycoerythrine.

When it comes to light sources your main choices are:

All of these will work for growing all the types of algae.  To us, the most important choice is simply what will work with your operating and capital costs to set up your project.

LED lights for photosynthesis of algae 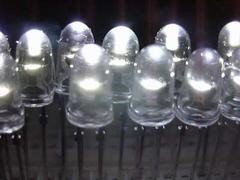 A lot of attention has been given to LED’s (light emitting diode) lately as they are a very efficient way to convert electrical energy to light, without wasting much energy as heat.   We like them here at ARS.   White LED’s (see the spectrum in Figure-4) emit energy in an number of wavelengths, many of them are useful for photosynthesis.  However, much of the green light is not useful for algae.  We at ARS use some LED’s in our operation, we like the white type because it allow our scientists to use our eyes to visually inspect the cultures.  If we were to use the Red and Blue LED’s that are useful for photosynthesis we lose information to our eyes about the health of the cultures.  Also, we love the pretty colors that the green light reflects- you have to love what you do, right? Next we look at fluorescent lamps.  We at ARS like these because they are inexpensive and available everywhere.  LED’s are becoming more widely available and inexpensive, but still are a little of a luxury.   Fluorescent lamps emit across a wide spectrum.  They do get warm and the lamps need to be replaced every year or so, which can add up in cost.  If you are smart, you can capture some of the heat and use that to warm up your cultures (if they like to be warm).

Sunlight is the obvious ‘natural’ choice for growing algae.  For a lot of folks, indirect sunlight is great.  A north facing window is just about perfect for most algae.  Algae in direct light depends on the culture volume.  Direct sunlight on a culture is best done in large cultures.  Small cultures less than 40L run the risk of becoming too hot and receiving too much light.

If your culture does get exposed to direct sunlight and overheat, get it to the dim light right.   Most stains have the ability to shed excess light energy using photoprotective mechanisms (see the xanthophyll cycle and carotenoids in the glossary).  But too much heat and light will kill a culture fast.  Lets call it 39C for 5 minutes exposure to sunlight is death for the culture.

The spectrum of sunlight is perfect for growing most algae.  It does contain UV (ultraviolet) that can damage the genetic material of algae, think sunburn.  Also sunlight contains IR (infrared) which is essentially heat. Figure-7 below, shows the visible light spectrum from sunlight, recall that PAR is 400-700nM.

Figure 7: Sunlight intensity as a function of wavelength

How much light is too little and too much?

We are going to talk numbers, so get ready.   When we talk about the amount of light that photosynthesis requires, we generally use Einsteins.  Einstines are a mole (6.02×10^23) of photons (yes, named after Albert Einstein,  when you make discoveries in fundamental physics, they will name stuff after you too!).  Here we talk about light (einsteins), per unit time (seconds), in an specific area (square centimeters.)  As such, photosynthetically active radiation (PAR) was formerly often reported in micro-einsteins per second per square meter (μE m−2 s−1). This usage is also not part of the International System of Units and when used this way it is redundant with the mole.

This means that a culture is getting up to 20x more light than it needs when you put it in direct sunlight.  Try not to make the RSPCA (Royal Society for the Prevention of Cruelty to ALGAE) come for you! There are two simple derivations of the equation that are commonly used to generate the hyperbolic curve. The first assumes photosynthetic rate increases with increasing light intensity until Pmax is reached and continues to photosynthesize at the maximum rate thereafter.

Culturing these rotifers has been a lot of fun. My fish and even some corals love to eat them. The baby clowns really like them.
END_OF_DOCUMENT_TOKEN_TO_BE_REPLACED