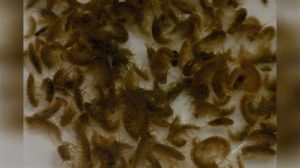 Our freshwater Amphipods are typically less than 10 millimetres long, they are among the more beneficial freshwater invertebrates we can introduce to our freshwater aquariums, along with copepods, daphnia and MicroMagic 4 freshwater species live algae and Australian native snails. Aquatic Live Food’s supply of amphipods, copepods and daphnia are all grazers of microalgae and macroalgae.

This mix will help control the growth of algae that might otherwise become an issue. The copepods, daphnia, amphipods and snails are beneficial in the main tank as well as the refugium.

Please use only captive-bred organisms in your reef aquarium. When the female amphipod is mature, she will then bear a marsupium, or brood pouch. This holds her eggs while they are fertilized, and until the young are ready to hatch. Once the female amphipod ages, she will produce more eggs in each brood. Amphipods have no larval stages; the eggs hatch directly into a juvenile form, and sexual maturity is generally reached after 6 moults they should be either placed in the refugium or filter floss compartment to start off your culture.

Culturing these rotifers has been a lot of fun. My fish and even some corals love to eat them. The baby clowns really like them.
END_OF_DOCUMENT_TOKEN_TO_BE_REPLACED